Inspired by Lyssachelle at Kind Of A Mess today you get a post about my awesome and creative mom, and her clever punishment methods.

I had a rough year my junior year. I was in fact a miserable little shit. So the following punishment was in fact richly deserved.

My mom's boyfriend had a 50 gallon fish tank. About the same time that I got myself into some trouble, they decided to change the gravel in the bottom of the tank from four colors, to a single color. Do y'all know how much gravel is in the bottom of a 50 gallon fish tank? A whole damn lot. That's how much. A full five gallon bucket, for those of you who'd like to be able to visualize it.

My mom did not ground me for a set period of time, or take away my telephone, TV, music, or pleasure reading privileges. Instead, I was grounded from leaving the house until the fish gravel was all sorted into its separate colors. I could sit in the (heated) garage and sort it as much or as little as I wanted during a day.

If I didn't want to sort, I could hide in my room and read, or do something else, as long as I was in the house. But the longer I put it off, the longer I would remain grounded. You see what that clever woman did there? She used my lazy teenager self against me. I could be lazy all I wanted, as long as I was ok with staying in my Fortress of Solitude (err, room) for all eternity. Or at least until I graduated. I'm a pretty solitary creature by nature, but at 16 this was just unacceptable. It surely encouraged discipline and diligence in me. Which honestly, has carried over well.

For the curious wondering how long it takes to sort a 5 gallon bucket of fish gravel, I can't actually give you an answer. After about three weeks of solitary confinement is the cool, lonely garage I was set free. I'm not sure if it was that my attitude had significantly  improved, or that she took pity on me. Probably it was a combination of both.
Posted by Social Ninja at 4:04 PM 6 comments:

Fist words spoken in our house this morning:

Me: "You're so handsome."
Kitten: "You're so sexy."
(This was even with the amazing amount of bedhead I had.)

*This post is a test of the Blogger Mobile App.
Published with Blogger-droid v1.6.7
Posted by Social Ninja at 10:17 AM 2 comments:

Email ThisBlogThis!Share to TwitterShare to FacebookShare to Pinterest
Labels: Conversations With Kitten

Stuff Said In Our House!!

I got this idea from the fabulous and hilarious Alyssa from Kind of A Mess. Here's some stuff that has been said in our house during the past couple of weeks.

Kitten: (On the subject of defense contractors.) "The government is like a 15 year old girl with a short skirt on. And no panties."

Me "I'm not going to regurgitate worms into your mouth. Don't leave it open."

Me: "I'm getting dirty with love!" (This was not meant, nor implying anything sexual.)
Posted by Social Ninja at 11:14 PM 1 comment:

I'm sorry to say Borders, but I think something's not right here... 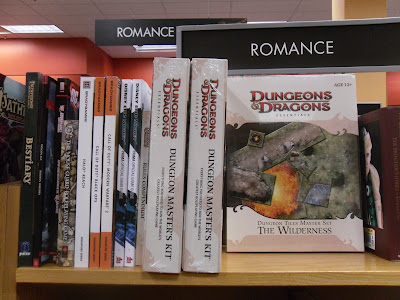 Email ThisBlogThis!Share to TwitterShare to FacebookShare to Pinterest
Labels: geek, not likely, photos

In which a bathroom break goes wrong

Today I'm going to tell you a story from the long ago days of my youth. Back before cell phones, in the very early 90's. Since Lauren and Kinzie both shared pee stories this week, I thought I'd join in. (OK, so it's last week at this point. Better late then never, right?)

When I was in middle school I had a friend, Jessica. We had a lot of fun together, and did all sorts of things together. Our moms were even friends, so even though she lived on the other side of town*, we still got to see each other a lot. Since our moms were friends, we'd go on little road trips around New England together when the weather was decent.

On one memorable occasion we went to the Yankee Candle factory in Deerfield, MA. It was a long trip. So of course, rest stops needed to happen along the way. Now, there's a large stretch of highway where there are no rest stops and very few (and far between) exits. It was on this stretch that Jessica declared her need to stop for a bathroom break. So we started looking out for a rest stop or exit. And looking. And looking. Finally, about 20 minutes later, we happily pulled into a tiny rest stop. By this time we both had to go, and were both relieved to be there. Well, that relief didn't last long. Not for both of us anyway. It turns out that the rest area was closed.

Now, I was a rather daring and practical sort of child. I had also gone camping for a week every summer with my dad. So peeing outside was neither foreign or distressing to me. Jessica was of a more delicate nature however, and was more apprehensive about the prospect. She wanted to wait it out, even though we didn't know if we would be able to find one in time. I on the other had, saw no reason to wait. After all, we could just go behind the building. It appeared to butt up against the woods, and no one else was around.

I scouted ahead around the little building and confirmed that the trees did in fact grow almost up to it. There were also a few bushes, as if someone was thinking of our privacy. By a stroke of luck there were even some maples. I knew already that maple leaves make mighty fine wiping leaves, in the event that you needed some. They're wide, and strong, and easy to identify. You know that they're not something you'll mightily  regret wiping with later, like poison ivy.

Being the dutiful daughter that I am, I jumped out of the car to do so. Well. This is where it gets interesting. This is the bit where a couple of adolescent girls get abandoned at a rest stop somewhere in rural Massachusetts.

You see, when I hoped out of the car, my mom thought it was Jessica hopping back in. So she did the logical thing to do. She waited a moment for us to get settled in and put our seat belts on. Then she drove off. Without us.

(Here I should pause to note that Jessica and I were both only children. And both quiet by nature. So the following isn't really that odd.)

We were just far enough away, and off to the side enough that even running after the car waving our hands didn't help. We just plan old weren't able to get into view of the rear view.

At this point Jessica did what any normal young girl would do when seemingly abandoned by her mother at a rest stop in another state. She panicked a bit. At the same time, I did what any over logical person with a constitution of steel would do. I looked for a decent place to sit down. After all, I knew they'd be back. I convinced Jessica of this after a few minutes, and we actually had quite a nice little time. Like I said, it's a long trip. And even quiet, well behaved kids get sick of being in the car after a couple of hours. The weather was warm, the sun was out, and no one else stopped at the (closed) rest stop to give us alarm. I would even go so far as to say we had a quite lovely time. Even still, we sure were glad to see our moms pull back into reststop about 30 minutes later.

*I'm from rural Vermont. Very rural Vermont. When I say the other side of town it should be noted that I mean that she lived 10 or 15 miles away, on top of a large hill / small mountain. It was a good 20 - 3- minutes to get to her place from mine.
Posted by Social Ninja at 9:13 AM 6 comments:

I made myself a fluffernutter sandwich, and after I was done Tony made one. This lead to a rousing and very domestic conversation about our preference for creamy peanut butter versus crunchy. Which then crated this humorous little bit of conversation.

Tony "I don't really care either way"
Me "I like the crunchy better. Plus, I feel like if holds the fluff in sandwich better."
Tony (While making a fluffernutter) "But I don't make fluffernutters."
Me "You're making one right know you know."
Tony "You're bad. Stop being bad."
Me (laughing) "Well, you are."
Tony "Don't you back talk me. I'll cut your face off and feed you to lions!"

We have such a sweet and affectionate way of showing our love, eh?
Posted by Social Ninja at 2:03 PM 8 comments:

Today, after a lovely morning at home, I dragged Tony to My Little Cupcake. It's a new boutique cupcake bakery nearby. But you didn't guess that, huh? Then I got home to find my Post War Trade package in my mailbox. Pretty good day, huh?

We got a mix of all the different mini cupcakes they had available, is assorted flavors. Flavors like Mexican Chocolate, Red Velvet, Carmel Cashew and Maple Bacon. Yes, you did hear me right. Bacon cupcakes. Those two in the bottom left-hand corner are the ones, with pieces of bacon on top. I'll admit that although I love bacon, I was a little skeptical. But, it was wonderful. Really, really tasty. 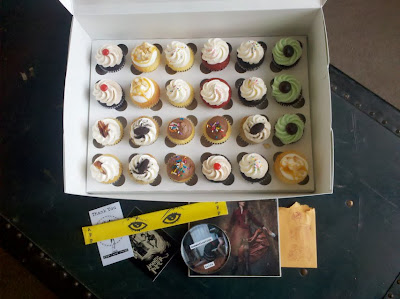 Then I got home and my package from Post War Trade was in, making life even better. Today is a pretty good day.
Now I'm off to nom another mini cupcake. How's your weekend going?
Posted by Social Ninja at 2:39 PM 2 comments:

Social Ninja
I'm not the wallflower you think I am.

Other Blogs To Check Out